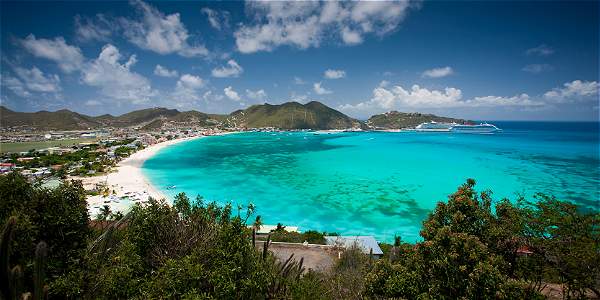 This, ideal for rest, captivates with its Dutch and French traditions Caribbean paradise.

Legend has it that to divide the Caribbean island of St. Martin the French and Dutch decided, after a jolly evening, the next day two of the locals would come trotting from the same point on the opposite edge of the island to re-address find. There would mark the dividing line.

Apparently, the French wore that night to his Dutch countrymen offering generous amounts of wine, the consequences of which took effect the next day. Hence, the Netherlands had not gone very favored in the distribution. However, historians have the official distribution of the territories became more based on economic interest and official treaties.

Saint-Martin-in French- or Dutch–in Sint Maarten is one of the last islands of the northeastern part of the cord called the Lesser Antilles, located about 240 kilometers from the island of Puerto Rico.

For regular cruise travelers, this destination may find familiar, as one of the stops of the Caribbean in the free port of Philipsburg, the capital of the Netherlands, famous partly for its stores of precious stones, watches, liquor and brands recognized clothing, among other items.

However, this destination has also begun to attract the attention of the Colombian and South American, thanks to the offer of flights departing from Panama City, a distance of two hours by air from the Caribbean island.

Indeed, one of the main attractions is the famous Dutch side Maho Beach, above the runway at Princess Juliana International Airport, where dozens of tourists gather every day to photograph the arrival of the aircraft, which They spend just a few meters from their heads.

The runway is separated with two metal fences and has a long rope that people can take to also feel the power of the air shed turbines aircraft at takeoff.
Another curiosity is the airport its extensive VIP area, where the private jets of celebrities and executives of the world appreciate. In fact, 85 percent of the island’s income comes from tourism.

Therefore, one of the ideal accommodation on this side of the island, is the Sonesta Maho Beach Resort, in addition to offering all-inclusive plan, is a two minute walk from the beach.

In addition, a quarter of an hour there, between a park, previously was one of the courts most recognized courses on the island, destroyed by Hurricane Luis in 1995, you can spend the day on the beach of Mullet Bay, whose crystal clear and calm waters shimmering, turquoise and green pastel overtones, making it one of the most beautiful resorts on the Dutch side, ideal for families with small children. There you can rent two chairs and an umbrella for an average of $ 15 a day.

In total, the island has more than 35 public beaches for swimmers seeking different types of distraction: from the contemplative plan for sunbathing to water sports activities.

Depending on the tastes of the visitor, it is important to note that the Caribbean side offers calmer waters, while the beaches facing the Atlantic Ocean, such as the French zone, are more favorable for lovers of sports like kite , windsurfing and surfing.

And for good diners, the island has a range of 365 restaurants where you could dine in one every day of the year. Indeed, one of the most visited areas is to Simpson Bay, where it is advisable to check the price of a pound of lobster, they publish notices on the doors every day, and between 20 and 25 dollars.

20 minutes by car from the west side of the island where the airport is located and the most exclusive resorts get to Philipsburg in Groot Baai (Great Bay). It is the place of arrival of the cruise. A Wednesday in high season (from November to March) may be up to nine of these large vessels.

There, one of the recommended places to visit is a peculiar white wooden building with red, inspired by the first native who built in the typical island rum manufactured from Guavaberry is achieved, a small fruit of the area which gives its name.

The journey continues through pathways interconnected by roundabouts, on which you can see sculptures of pelicans -the symbol of the island or national heroes that refer to the time of slavery, which allow entering French territory, whose capital It is the town of Marigot.

Although it is recommended to carry your passport, the authorities often do not put any problem to move from Dutch side French.

In the French zone, one of the ideal places to spend a day at the beach in peace is Pinel Island, a small potion of land surrounded by white sand which is reached by a boat after crossing the bay Cul de Sac. This route has a cost of $ 10 one way and return.

There you can lunch fresh fish or lobster salad in the Karibuni restaurant, which also offers the service of rent chairs and tanning umbrella for $ 20.

And for those seeking an ideal for honeymoons or comfort, most exclusive five minutes drive from the bay you reach the hotel-spa Radisson Blu, famous for having one of the adjacent pools largest sea Caribbean.

This accommodation is also ideal for lovers of fine cuisine, finding ten minutes drive from a small town called Grand Case, with an interesting choice of 67 restaurants.

Two of the most recommended places are the Calmos Café where you can watch the sunset in the company of a good cocktail accompanied by camembert cheese and squid, at the foot of the waves.

And next door, is the French restaurant Le Pressoir, one of the most exclusive of the island, run by its owner. The French specialty is exotic cuisines with local ingredients. Fish suggested are the Mahi Mahi, Wahoo, and Snapper, typical of those seas, which are served with combinations of sauces, mango and coconut.

Although it is possible to find a varied menu of French wines, accompanied by foie gras , duck and cheeses.
For lovers of different activities, the French side offers two very colorful: prepare the perfume of dreams and feel the sensation of being a monkey , going from tree to tree through their domes.

In the French perfumery Tijon run by its owners, you can take classes one or three hours, in which you learn to develop a fragrance. An offer of over 300 essential oils such as coconut, orange, jasmine, musk, vanilla, ginger and patchouli famous, can be combined in different proportions to give life to the ideal perfume. Costs vary between 75 and 129 euros, depending on the type of school you choose.

It is important to note that most of the activities in this part of the island are priced in euros since the EU territory. On the Dutch side, premium dollar, but also they receive the Dutch Antillean guilder.

And lovers of ecological activities, should not miss the reserve Loterie Farm, a complex of outdoor attractions built on one of the 63 sugar plantations that had the island, dating back 400 years.

There one of the best activities is the circuit of trees with rope bridges (a trip through the tops of the forest trees ) with 32 different obstacles and 11 airspeeders cable that can be traveled in an hour, ending with a relaxing dip in the pool. The cost of this tour is 35 euros for adults and 20 for children.

To close the path, back through the town of Marigot, one of the must-see is the strong Louis, a small historic stone building with guns, whose summit hondea the flag of France, built to defend the city from sea attacks .

Marigot is a city that can be crossed on foot in a day and offers small dining option as typical restaurants, with rice beans, plantain, yam and fried fish or shrimp with garlic. These facilities are located around the marina Gare Maritime.

Thus, for those travelers who dream of living a tourist experience in one of these unique pieces of land surrounded by sea on all sides, always refer to the idea of ​​perfect rest and reverie, Saint-Martin is a different option, with a rich combination of two cultures that goes beyond the usual day of beach facing the Caribbean Sea.

Although Colombians need the British visa, 18 or 30 minutes by speed boat on a ferry type boat, you reach the island of Anguilla located in front of Sint Maarten. The island is known for offering a quieter, ideal for lovers of non-motorized water sports such as diving and snorkeling environment.

The island has 33 beaches whose sand is characterized by ivory white. Two are the most luxurious hotels on the island: the CusineArt, which features a 18-hole golf courses designed by famous player Greg Norman, and the Viceroy, in which famous personalities remain international celebrity.

This island, with a wide gastronomic offering Italian, Japanese and Mediterranean cuisine, is famous for being one of the favorite destinations of people like Messi, Shakira, Pique, Sofia Vergara and Mariah Carey. The ferry ride will cost $ 20 and to leave the island have to pay tax on the near $ 30.

– Copa Airlines offers flights to the island of St. Martin, from Ciuda of Panama.
– A San Martin visa can enter the United States or the European Union. To move to the island of Anguilla is essential British visa.
– Almost all people are fluent in English, although the information and signage in the French zone is in their respective language.
– In the Dutch part you can pay with dollars or guilders. On the French side everything is tazado in euros, but you can pay with dollars.
– The island offers several options for mobilization. It is possible to rent bicycles, taxis and you can also rent a car for an average of $ 35 per day.
– Ideally buy a hotel all-inclusive plan, to reduce costs, since it is a destination high range.

* At the invitation of Interamerican Network, Anguilla Tourist Board and Copa Airlines.